Last week I took delivery of a spinning wheel. My mother found it in a second-hand shop for £40 and couldn’t pass it by. My father fixed it up and she had a little go at spinning but predominantly used it as a prop for her history lessons. She doesn’t have a use for it any more and has had it in storage for a couple of years so she offered it to me so I could have a go at spinning my own yarn.

We believe that the wheel is an older model of an Ashford Traditional Spinning Wheel, Mr B did a little research for me and ordered up some new parts as the wheel was missing some bits and bobs. He got on the Fibre Hut website and bought an extra bobbin, a Scotch Tension Kit, a Tension knob and a threading hook. The parts arrived quickly and they included a catalogue of Ashford Looms and fibre, a copy of ‘The Wheel’ magazine and a little packet of sweeties.

We were very excited when the package arrived and wanted to get spinning right away! We took a little stroll round the corner to our lovely local yarn shop The Wool on the Exe where the lovely shop assistant pointed us in the direction of a ball of wool ‘tops’ – wool that has been cleaned and carded and ready to be spun. She showed us some beautiful merino and silk tops but recommended that we started with something a little cheaper. The Wool on the Exe is a fantastic local resource, they run regular Spinning Wheel workshops so if my adventure does not go to plan I am definitely enrolling on one of their courses. They’re only a couple of a hours long, cost £30 and promise to have every student going home with a ball of hand spun yarn.

Having bought our tops we gathered around You Tube to learn the basics of spinning and then made our first attempt. What can I say? It’s harder than it looks! I spent a good hour adjusting tension and trying to get my foot pedalling in time with the spinning and pinching the wool to get it to spin and managed to produce a tangled mess. Then Mr B tweaked the tension and the springs and the wheel and had a go of his own and managed to produce another tangled mess and after much giggling and swearing and coating the carpet in bits of wool we decided that we should probably do a bit more research before we make another attempt! 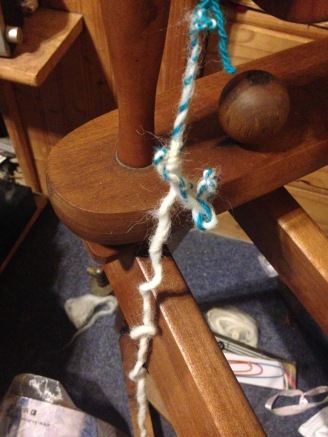 Look at those lumps

I have started sewing up the Land Army Style Jumper that I am making for a friend. I had to order up some 3.75mm double pointed needles to finish the V-neck and some stitch holders. I had some large safety pins once upon a time with cute owls on them. I bought them from Charmed Knitting and used to use them as stitch holders but I think they are in my UFO box with tentacles sitting on them for a Cthulhu Ski Mask I was making for my father before he passed away. I’ve been torn between finishing the mask anyway, or frogging it, I’m not sure I’m ready to make that decision yet so the stitch holders remain out of action. I’ve been holding the stitches for this jumper on a pair of Square Bamboo Needles which stop the stitches moving around but they’ve not been ideal and whilst I’m ready to knit the held stitches now I’ve also started a colourful jumper for myself so will definitely need stitch holders again soon.

I also continue to make a ‘Tatter Coat’ with frosty icicles for Mr B to wear as part of his traditional Jack Frost inspired ‘Winter Fairy’ costume. ‘Tatters’ are usually associated with traditional English Morris Dancing but are an old fashioned way of producing an effective looking costume cheaply. I am cutting up various scraps of blue, cyan and white material – predominantly net curtains, off-cuts and old clothing – into long ‘icicle’ shaped strips and then sewing them onto an old shirt along with some silver ribbon. They are looking really good at the moment. I hope to be able to post photos of the finished costume soon.

So There You Have It…

This evening we have a ‘date night’ planned which includes home made pizza and Spinning Wheel based videos in the hopes that next week I’ll be showing off the beautiful hand spun yarn that I’ve produced – or in the very least a slightly less tangled mess. I’d love to see anyone else’s attempts at spinning, or any hints and tips that you might have?

View all posts by sylvanstitches