This week has been a sad one in the Sylvan Household. One of Miss T’s little pet mice, Cloud, passed away. Earlier in the week we noticed that she was getting a bit wobbly on her feet, after that she just got slower and slower until all she could manage was to drag herself from her little house into her food bowl. Cloud was always the most nervous mouse, she didn’t like to be handled much and she didn’t like to leave her cage. The idea of taking her on a stressful journey to the vets to be put to sleep seemed worse that her current condition so, in the end, we carefully gave her water by hand, ensured she could reach her food and made sure she was comfortable. She eventually passed peacefully in the night. Her sister, Acacia, is very sad and lonely. She was always the more social of the mice and I think she’s really missing her friend. Miss T is very upset. This is the first pet she’s ever lost. 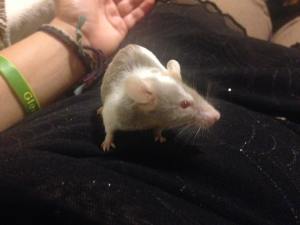 It’s very poignant that we have lost her at this time of year as today is the Neo-pagan festival of Imbolc, a time of death and rebirth. It’s traditionally the first day of spring, in recent times I’ve seen lots of people refer to the Spring Equinox as the first day of spring but it’s really more like mid-spring. As spring gets lumped in with summer so often we forget that the first spring flowers are often poking through the frozen ground, the first lambs are often born into the snow and april is famous for it’s rain showers. The pagan year is confusing, we often treat Samhain (Halloween) as the end of the old year, and Imbolc as the beginning of the new year. This obviously leaves three months between the end and the beginning. I like the idea that winter doesn’t count as part of the year, and of course in an agricultural society, it didn’t.

At Imbolc we celebrate the rebirth of the Goddess. Throughout the winter she has been represented by The Wise Woman (sometimes known as the Crone or Hag – or as Pratchett called her ‘The Other One’) but at Imbolc she is reborn as The Maiden. We can see this is the renewal of the plants around us, the first green buds and the first flowers. The Snowdrop is traditionally the symbol Imbolc as it’s just starting to bloom at this time of year. The God, who was reborn at Yule, is gaining in strength. It’s hard to believe we only have another six weeks until the day and night are equal length again.

We celebrate in a variety of ways. Yesterday (to ease Miss T’s grieving) we made paper flower headdresses which we intend to wear this evening for our ritual. We usually light candles and make new years resolutions – sowing seeds for the coming year. This year we may light an extra candle to see Cloud off into the next life as I’m sure mice are reincarnated too! We will eat pancakes, which is not necessarily traditional, but was a special request from Miss T as she’ll be away with her grandparents on Pancake Day anyway.

At the weekend we’re hoping to take a stroll up on the moors. There is a stone circle and a ‘Tolmen Stone’ (a stone with a hole big enough to get right through) and it has become a tradition for us to take a picnic up there to look for signs of spring.

Imbolc has more practical rituals too. This is the time of year to open up the house and dust off winter. We usually try to have a spring cleaning blitz and as I type this Mr B is dragging all the junk that has collected in our home office down into the dining room so we can have a proper sort out. Over Christmas it’s collected a lot of stuff, which has resulted in me typing this sat on the laptop in the living room, instead of using the desk!

I should probably get up there and help though! Bright Imbolc Blessings everyone!

View all posts by sylvanstitches